Cop to Corpse by Peter Lovesey 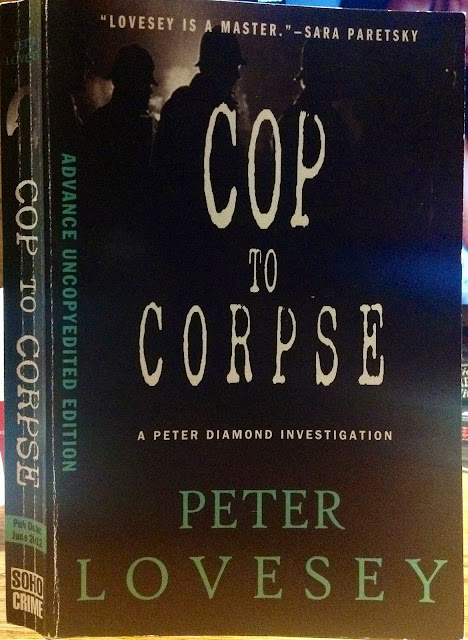 Thanks to Ms. Rafferty of Soho Press for my ARC of COP TO CORPSE by Peter Lovesey. It's set to publish in June. It's my introduction to Peter Diamond Series. I enjoyed it thoroughly. It starts out with a bang. A cop, PC Harry Trasker was shot dead. He's the third policeman to die in Bath area. The investigators are going to great lengths to catch the culprit.

Chief Superintendent, Peter Diamond is called to the case, which might turned out to be the most dangerous yet. He's got a couple of close calls. The first one, he was lucky not to die when a motorcycle almost run him through. Peter is an enjoyable character. He's single, as I understand it, his wife/partner died a few books ago. I'm curious how he is with a partner, so I'm going to look at back copies of this series.

The mystery is nicely laid out. I have my suspicions when I met a certain character, but it was camouflage enough that I have so much fun reading the book and finding out for sure whodunit. It's an enjoyable book because I get a lot of local culture. It's almost like a tour of the localities. I haven't been anywhere near UK, but I got a good picture. Peter Lovesey sure paints vivid images of Bath and surrounding area.

There were many twist and turns to the investigations....and I think I got a lucky guess.  This was a character who pretty much dominated the first few pages. He gets on your nerves, but I am invested to find out how he turned out. Unfortunately, he didn't turn out much because he was shot, and stayed that way. He didn't die, so I wonder if Lovesey will visit this annoying character at later books. I found the whole mystery very entertaining. I highly recommend it.

The picture is the copy I read...it's a little bit worn because I had to flattened the binding to read it every where.