Between The Lines by Jodi Picoult and Samanta Van Leer 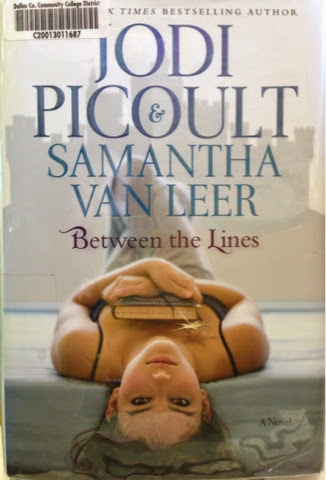 I am sitting in the library.  I am actually in the middle of my 24-hour take home exam when I needed a rest room break.  On the way to my study carrell, I strolled through the floor to ceiling window to look at the beautiful sunny day outside.  You see, when you're in law school and it is exam week, going outside will just have to wait.

Then I saw this book, filed under B for some reason.  I am trying to figure out why Brookhaven Library filed a book under B when its author's last names starts with a P or a V.  The only thing that comes to mind is that the title starts with "B".  But, that is rather a peculiar way of shelving a book. It is rather like my canned good pantry with red bean, black-eyed pea, chick pea, white beans are all sitting under "L." It is because it is legumes and I thought it would make it easier to find the "beans."  However, the "B" filing because the title starts with a "B" is weirder. I have to say.

I made it to page 44 in less than 10 minutes.  Then I say to myself, what are you doing? Go back to your International Intellectual Property (IIP) finals or you are going to regret it.  So, I am going to put this book on my list to read that 10 days I have off between after my last finals and the beginning of my summer school and immigration internship.  Yes, 10 days.  It's also the same 10 days I need to shop for a new bathroom vanity, talk to our accountant about taxes, read some immigration hornbook, and maybe overhaul my 100-ft-x-60-ft backyard.  I was planning to plow the yard myself and then putting new dirt and grass on parts of it. Some parts of it by the sandpile and the trampoline, I was thinking something colorful or pretty bricks.

And then I think I am crazy because it is my 10 days of break before I go back to summer school and then Fall.

And yeah, I had a flower post that actually had people visiting and posting - well, I accidentally deleted it in my iPhone apps and now it is gone. However, the comments are still here. I'll have to post them again. Later.  After all, IIP exam awaits.

However, this book is very thrilling.  This is the description from Amazon.com:

The #1 New York Times bestseller filled with romance, adventure, and humor, from Jodi Picoult and her teenage daughter.

What happens when happily ever after…isn’t?

Delilah is a bit of a loner who prefers spending her time in the school library with her head in a book—one book in particular. Between the Lines may be a fairy tale, but it feels real. Prince Oliver is brave, adventurous, and loving. He really speaks to Delilah.

And then one day Oliver actually speaks to her. Turns out, Oliver is more than a one-dimensional storybook prince. He’s a restless teen who feels trapped by his literary existence and hates that his entire life is predetermined. He’s sure there’s more for him out there in the real world, and Delilah might just be his key to freedom.

Delilah and Oliver work together to attempt to get Oliver out of his book, a challenging task that forces them to examine their perceptions of fate, the world, and their places in it. And as their attraction to each other grows along the way, a romance blossoms that is anything but a fairy tale.


This book sounds totally awesome. I will be a grown up and wait until after  my 6 finals - where the only grades I am getting is my "final" performance.